My Short Film 'With or Without U2' - Most definitely without U2! Can you help?

Recently some of you will have seen me jellified with joy that my teeny tiny debut short film With or Without U2 made the finals of the LA Comedy Shorts Film Festival! I have been in a permantent state of delirium and possibly reached critical mass several times. Quite pleased.

It’s a silent film written to a soundtrack: With or Without You sung by a Belgian all girl’s choir: Scala.
But in a devastating twist it can never ever be shown in public as it stands. Ever. Why? Sadly, it's because U2 have declined our license application to use any version of their track.
If you want to read the full story it’s below, but for those time poor but compassion rich, I am asking for HELP!! I have a cunning plan to jump through a loophole…. 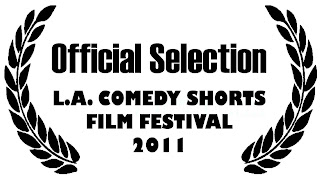 The LA Comedy Fest are totally behind my idea – to show the film in the style of the silent era, with a live choir singing the score! Amazing! They love this idea so much we’re now headlining the Saturday night screening!
But only if I can recruit:
And if we win our category, every cent of the prize money will go to Comic Relief!
Granted, this is a tall order, but if you know anyone who might be able to help, please do get in touch, I would be unutterably indebted and grateful! X
isabelfaycomedy@gmail.com
Here are some images from the shoot http://www.flickr.com/photos/isabelfay/sets/72157626163161355/
The long version:
So… having made a few sketches to music, like this one for Funny Or Die http://www.funnyordie.co.uk/videos/0c48868303/total-paperclips-of-the-heart-from-fod-team-uk?rel=user&rel_pos=2 I have fallen in love with writing comedy to music. It’s such an inclusive way to work: if you remove language you not only get to find inventive ways to tell stories, you also get to tell them to literally anyone in the world. Music and visuals are universal languages.
In my eager naivety as a first time producer, I had no idea that I needed the music licenses approved before shooting. Idiot. I know. But a keen, passionate idiot. So with barely a budget to speak of, ace director Lee York and I invested and shot it with the highest possible production values, because the entire cast and crew worked like demons for love and cake. But not a penny of coin. I was genuinely astonished that so many seriously talented people gave their skill, time and love to this film so willingly! 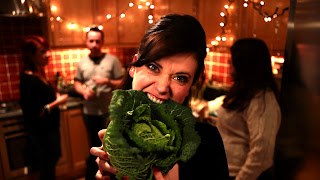 Written to a beautiful version of the iconic U2 track With or Without You, sung by a Belgian all girl’s choir Scala: It’s haunting, lush and we shot every moment to the beats of the music. I used the track because it was stunning. Then I applied to Blue Mountain music for just a one year festivals only license to show it at film festivals. No internet, no TV, just a festival only license for 12 months. They asked for a copy for the band. Wowsers in trousers! The band! Sure thing, Bono watching my little tiny film, what an honour!
But I’m devastated to say the band have personally said an unequivocal no. This is of course completely their right, it's their song! And a gorgeous song it is too.
But I don’t let little things like nay-saying megastars keep me down! Too many people have worked like demons for this. So, with the festival’s full support we’re looking for an LA based choir or glee club just crazy enough to learn a new arrangement in the next 2 weeks, and to sing my soundtrack live! The festival are so behind this idea that they have moved our screening, it will now headline the Saturday night show! I am over the moon.
So if you know anyone in LA who can help? If you happen to be friends with an entire choir? Or have friends there who will be willing to help? I would be so grateful. It ain’t over til the glee club sings! X
Posted by Isabel Fay at 05:58