With, most definitely WITH you lot!

Wow wow wooo-wow, you people are nothing short of amazing. In the last 5 days since my first blog asking for help I have been showered with offers of support, help, introductions and general resounding cheering! You lot have taken this mad plan to heart and messaged me in your hundreds upon hundreds. I am utterly overwhelmed by how kind each person who has taken the time to get in touch has been. THANK YOU!! *bottom lip quivvers*
I’m super duper grateful, truly awed. I should leave it at that before get all Gwyneth Paltrow about the whole thing….
Anyway I am delighted to say, CALL OFF THE SEARCH!!
(*With several offers of places to stay - you loonies really want me in your house? Right now if I was a cat my tail would be permanently pouffed up like a bog brush. I’m quite jangly at the moment. Seriously you don’t want me, I have a hotel. But thanks so much!) 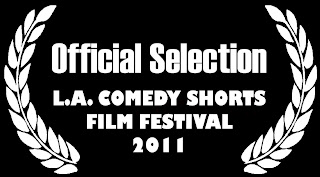 So I am over the moon to say that because of kindness of these (former) strangers, my tiny film With or Without U2 will not only still be eligible for the finals of the LA Comedy Shorts Film Festival, it will now be headlining the Saturday night screening and voiced by a chorus of angels with an amazing original arrangement!

One should always rely upon the kindness of strangers.
Here comes the “science” bit
Lots of you have asked about the licensing – how come I can’t play the film with the score but can use a live choir. So...
The choir Scala (who’s cover of the song I wrote my film to) offered me a license, no probsies, they were very sweet about it. But I still needed the license from the writers (who are of course U2) to have it as a soundtrack for the film. U2 personally said an unequivocal no to any form of license whatsoever. The end.
But my film is still my film, it just has to be silent.
As it’s being shown in a theatre in LA they have a license to play live music, as any venue like a pub, bar, theatre etc would. In real terms this means that I can come to your local pub and repeatedly sing Careless Whisper all the live long day with my ukulele and there ain’t a single thing George Michael can do to stop me. You might object though. Espesh as I only know 3 chords. Though given that I’m singing all the live long day I might eventually fathom a 4th chord, going with the Monkey + Typewriter x Time = Shakespeare theory. I digress.
Therefore if a live chorus HAPPEN to be in the screening room where my film HAPPENS to be playing silently, and they HAPPEN to sing With or Without You, well… there ain’t a single thing Bono, The Edge and The Other Two can do about that.
Yes, it means this will be the only time my film will be shown in public. Which makes it all the more special, and makes all of the messages of support and offers for help all the more heartening. I feel like the luckiest little lady in all the land and this is going to be an adventure. THANK YOU I'll keep you posted X
Posted by Isabel Fay at 04:13