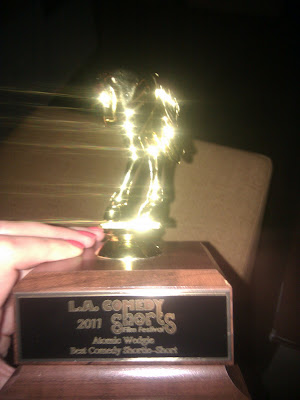 WOWSERS IN TROUSERS! Well I am delighted, baffled and discombobulated to say... we won the Best Comedy Shortie Short at the LA Comedy Film Festival. No really. We did! 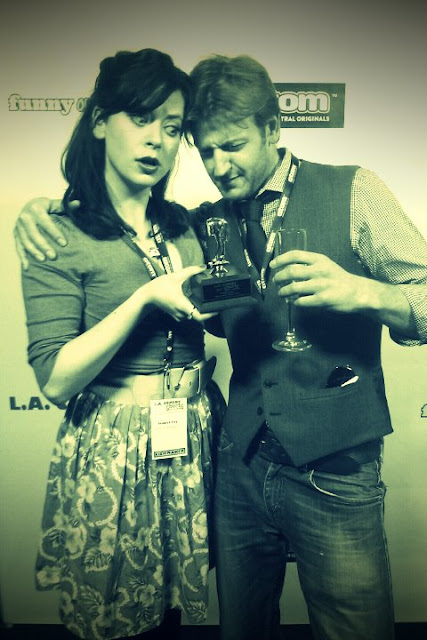 Yes we look delighted, baffled and discombobulated. See I wasn't lying!
Things have been so crazy that I didn't get a chance to blog after the glorious chorus sang on Saturday night, so let me take you back briefly...
THE SCREENING
We met them on Saturday morning. Yes the DAY of the screening! And when they first sang along to the film, which we were seeing on the big screen for the very first time, I'm man enough to say I cried like a girl. They were stunning. They'd clearly worked really hard to pull this together so expertly at such short notice, the were OFF THE SCALE and especially Lea Endres who was my gal on the inside, and Ben Fordham who stepped up as ace conductor...

Then on Saturday night, our little film headlined the screening, and this stunning choir elevated the flick to a whole new level! It was quite simply breathtaking to see this group of (former) strangers sing their hearts out for us, and a room of hardened film makers so supportive and touched. A. MAY. ZING.


We saw SO MANY awe inspiring films this week, it was an absolute flipping treat! The standard was extremely high! So genuinely the very last thing were were expecting was to win! So much so that we were filming the announcement of our category in order to flip the camera round on ourselves when whoever won and do the old classic ungracious loser swearing nonsense. So I did nearly drop Lee's camera when they said With or Without U2! 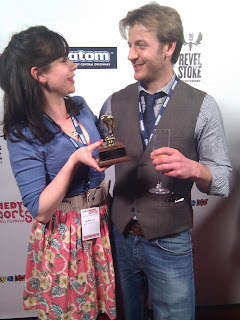 We were so delighted, baffled and discombobulated that we forgot to say a speech or use a single one of our noises. So... we would like to say:
A MAHOOSIVE thank you & well done to our cast and crew who worked like demons for love and cake but no coin whatsoever - Tom Price, Mark Martin, Nicola Lince, Tabitha Beckmann, Darren Vale, Robert Shiret, Carli Vallance, Chris Lince, The Mill, Mick Dow, Eirlys Bellin, Nana Amoo-Gottfried, Diane Easterbrook & Kes the Dog 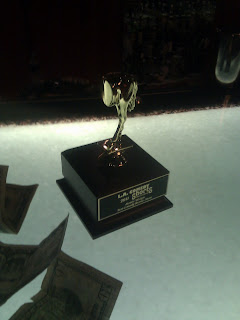 A GIGANTIC thank you to the members of the Silver Lake Chorus who sang so beautifully for us - Kevin Kim, Noel Soriano, Victor Mazzone, Anthony Starble, Greg Arata, Jennifer Knight, Pi Jacobs, Lijah Barasz, Stephanie Chan, Jennifer Daking, Samantha Posey, and especially to conductor Ben Fordham and our new BFF Lea Endres who not only sang beautifully but also organised the whole thing with me across the pond!

A GARGANTUAN thank you to Mark Roberts the incredible arranger & composer who created the entire gorgeous sound for the chorus in LA from Sheffield, and who we've still yet to meet!

And finally an EPIC thanks-a-bajillion to the incredible people of the LA Comedy Shorts Festival! Most especially Jeannie Roshar, Ryan Higman and Gary Anthony Williams who were not only mad enough to let us bring a live chorus along to sing, but who were so awe inspiringly passionate about comedy film. They genuinely LOVE unearthing treasures and helping new film makers, and the verve and zeal with which they run this festival is THE BOMB. End of. 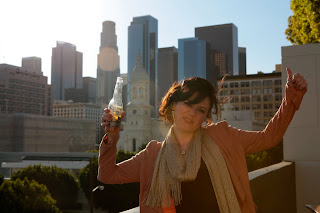